We have prepared a small interview with the Lead Developers of Sonic Outerland, Hajime Takahashi (Lead Programmer) and Honoka Yasuka (Lead Artist).

Q: Thank you for being with us today, Could both of you describe what this "Sonic Outerland" project is about?

A: (H.Y) - It's a new world, literally, new enviroments never before seen (or capable of being created) a giant land to be explored, with alot of challenges to be beaten. (H.T) - Like Yasuka-san said, this is a revolutionary adventure, i can safely say this would not even be possible to recreate in any of the other Game Systems in the market. With the SEGA Alpine Add-on, this game becomes a State of the Art piece, these 3-D Models would have not been possible a few months back, really.

Q: OK, Now that you mentioned it, could you tell us more about the Alpine?

A: (H.T) - The Alpine was probably the hardest part of the development process, mostly because we were creating brand new technology, out of thin air. The Alpine enhances the Saturn's graphical and memory capacities by atleast 300%. It was a necessity creating this Add-On, because before it, we were bound by the limitations of the Saturn.

Q: So, what is the most exciting part of this project, for both of you?

A: (H.T) - Oh, i think it's getting to see the final product getting assembled, it"s really gratifying seeing a project you worked on for two years get finalized, this has been a great journey. (H.Y) - Agreed, The development of this game led to me improving my work alot, and hopefully after this is done, i can continue working on revolutionary projects like Outerland.

Q: Yasuka-san, what level is your favorite in the game?

A: (H.Y) - Probably the Carnival one, with the Ghost Robots and all, it was really fun to model that. I would also say the last level is great, but telling what the surprise is would ruin the fun (laughs).

Q: How did you two join SEGA?

A: (H.T) - I was hired back in 1993, because of a programming contest that i won. didn't really work on much before Outerland, besides a few things in the Knuckles' Chaotix project. (H.Y) - I was hired the same year as Takahashi-san, because of my work as a 3-D Modeller for some Commercials, i didn't work directly in the development of games before i joined this project, i used to do Promotional Artwork for SEGA Mega Drive* Games. (*SEGA Mega Drive is the name given to the SEGA Genesis in other countries, ain't that interesting?)

Q: How did you come up with the idea for Outerland?

A: (H.T) - I was bored one afternoon, back in '95, fiddling with some Development System, and then i made a rotational 3-D Low Polygon sphere, that changed speed when you pressed a Key, not impressive at all, not even back then, But i was inspired, i imagined the sphere as a planet, full of little adventures to be had. i then contacted a work colleague that was doing some 3-D stuff for Chaotix to help on this little project, that colleague turned out to be Honoka. (H.Y) - We were going to use an original character at first, not Sonic, but we realised that if a recognizable character was used, we would have a bigger chance of approval. (H.T) - We made a rough little prototype, we quickly recorded a playtester playing it, then we did a meeting presenting the video cassette to alot of Sega Executives and Sonic Team Developers. They liked the project, and well, here we are.

Q: Ok, This is the final question, what are your expectations for Outerland?

A: (H.T) - Probably will blow some minds (laughs) But seriously, i hope it will live up to expectations, this really has been a passion project, and i think the work will finally pay off. (H.Y) - This project really became something bigger than we expected, something special, really.

And with that, we wrap up the interview. Stay Tuned for SONIC Outerland, Coming June 1997!! 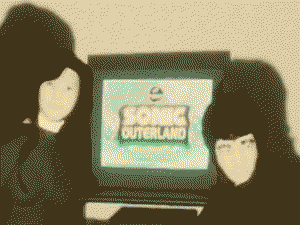